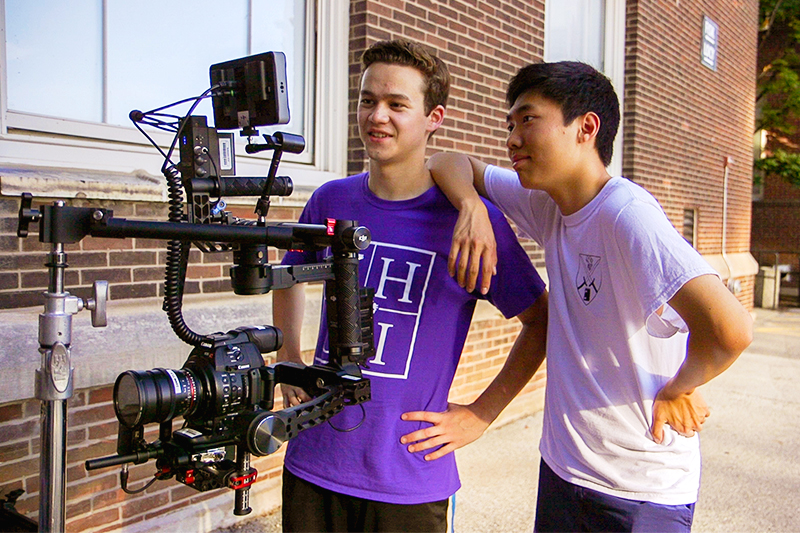 In May, NHSI alumnus, Adam Present, was honored with the Rising Star Award at the 2017 CineYouth Festival in Chicago for his short film Magnum Opus. Chicago’s local PBS channel, WTTW, will feature Magnum Opus this Sunday, October 8th at 10:30 pm as part of their 2017 Ciff Cineyouth Festival program.

Magnum Opus from NHSI Film and Video on Vimeo.

Present’s film; which he wrote, directed, and produced during the 2016 NHSI Film & Video Institute using a DJI RONIN stabilized video camera gimbal; was one of 77 short films featured in this year’s CineYouth Festival. As a local, Evanston, IL resident, Present’s film was screened in the festival’s Midwest’s Best category along with five other shorts by Illinois filmmakers.

In a statement to the National High School Institute, Present, who is now a freshman Radio/Television/Film major at Northwestern University, said,

I’m really grateful to have received the Rising Star award from the CineYouth Festival, and to be able to have my film Magnum Opus screened on WTTW. CineYouth is a fantastic festival for high school filmmakers – not only do they host a great event, but they provide amazing opportunities for filmmakers our age to have their films shown to a wider audience, such as on WTTW or at the Chicago Film Festival. I’m especially thankful to Tierney Tarleton, the lead actor in my film, for working with the festival to help make this all possible, as well as my incredible Cherubs cast and crew. As an RTVF freshman at Northwestern, I’m really excited to become a part of the Chicago film community, and this is definitely a great place to start.”

Filming of Magnum Opus during the 2016 NHSI Film & Video Institute

Filmmakers from across the United States and internationally who are 22 years old or younger are eligible to enter the CineYouth Festival hosted by the Cinema/Chicago organization. According to their website, Cinema/Chicago created the festival to encourage youth filmmakers and help them, “gain insight into positive behaviors, articulate themselves artistically, and have their voice heard.” Next May 2018, Cinema/Chicago will host the 14th Annual CineYouth Festival.