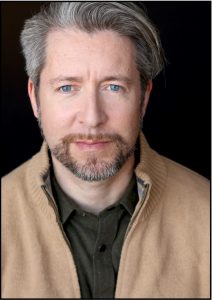 George Keating is a theatre actor, director and educator. George is a longtime member of Actors’ Equity Association and appears on Chicago’s many stages such as: Paramount, Goodman, Northlight, Chicago Shakespeare, Marriott, Drury Lane, First Folio and Court. George is co-founder of Theatrebam Chicago and co-creator of the award-winning hit show Schoolhouse Rock Live! and its sequel Schoolhouse Rock Live, Too!. He appeared in the original cast of Schoolhouse Rock Live! in Chicago, and subsequently for many years on tour and off-Broadway. George was honored to train in kabuki with Shozo Sato, Royal Treasure of Japan, culminating in a production of the world premiere Kabuki Lady Macbeth at Chicago Shakespeare Theatre. George received the inaugural Angela Lansbury Award for Best Supporting Actor at the International Mystery Writers’ Festival.

He holds a BFA in Acting from The Theatre School at DePaul University, and he is an Adjunct Professor of Movement to BFA and MFA Acting majors at TTS DePaul.

George has served as NHSI/Cherubs Core Faculty since the year 2000, and has directed numerous Cherubs’ productions. He performed the role of Associate Artistic Director in recent years and is now honored to lead the NHSI Theatre Division. The Cherubs history is long and the cherubs community is vast. George is dedicated to continuing the good work accomplished by his friend and predecessor, Ann Douglas, adapting traditions from decades past and working with the current generation to keep the Theatre Cherubs program going strong into the new decade. A true teaching artist for the last thirty years, he maintains an active presence throughout the theatrical profession and in numerous training institutions